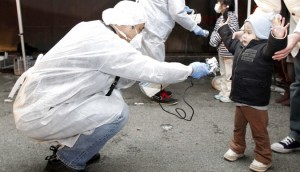 As the radiation levels are rising in damaged nuclear reactors in Japan, a concern has been raised as to how long workers can keep struggling to control it as the radiation exposure continues to rise.

Heroic tasks are being performed by the workers which include pumping seawater into the reactors and fighting to control the fire.

They are making efforts in places which have contaminated radioactive isotopes thus increasing their risk to radiation exposure.  Technicians who are still there face escalating radiation exposure and need replacement if its going to linger on.

According to Dr. Lew Pepper, a professor from Boston University, if workers exceed a specific amount of radiation exposure, they cannot return for at least a day, a week or maybe longer.  He further added that replacements are limited as there are not a lot of people who can perform this type of work.

Tokyo Electric, operator of the nuclear plant has declined to providing any details regarding the workers.

Arnold Gunderson, a consultant that worked in US plants identical to damaged Japanese plants stated that most probably company was asking retired and workers from other plants to volunteer and sacrifice as they may receive additional radiation exposure.

Mr. Gunderson also added that although those who are close to reactor are wearing full protective gear,  there are some kinds of radiations that can penetrate the suit.

Gamma rays, as well as other kind of radiation exposure, can be the cause of cancers and illnesses that can be extremely detrimental to the health in long or short term or could lead to death.

Each worker should be carrying a dosimeter, a tool measuring the radiation exposure and also keep an eye on it and, when it reaches a specific number, they should be leaving.

The workers know the way of removing the gear and avoiding any radiation particle on skin resulting in continued radiation exposure.