Home
Featured News
Barack Obama to African Leaders “If I Ran Again, I Could Win” 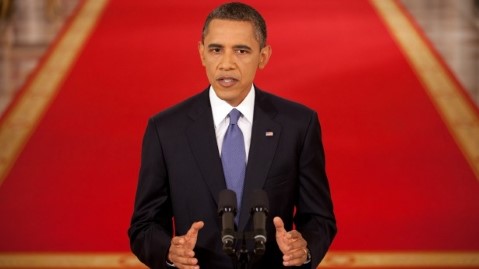 In a speech that Barack Obama gave to African leaders on Tuesday, he made several statements that were designed to get their attention. Many of the African leaders refused to give up power but Pres. Obama reminded them that he was ‘pretty good’ at doing his job and if he were to run for a third term, he could win.

The speech delivered by Barack Obama, which was given to the African Union on Tuesday was, in part, to remind those African leaders that they were risking instability and strife by staying in office for an extended amount of time.

Obama reminded those in attendance that “Under our Constitution, I can’t run again”. He then followed it up with the statement “I actually think I’m a pretty good president – if I ran again, I could win – but I can’t.”

He went on to state that the law is the law in the United States and nobody is above the law, not even the president. He expressed some surprise in the fact that many African leaders were unwilling to step aside from their political posts, especially since they already had a lot of money.

The speech that was provided by Obama was largely positive in nature. He let those in attendance know that Africa’s future was sure to be positive but that didn’t stop him from criticizing those who had no respect for democracy and who trample on the rights of other humans. To quote Obama, “Democracy in name, but not in substance.”

Burundi was one of the countries that was singled out in the speech. He criticized Pres. Pierre Nkurunziza for adjusting political rules in order to secure an office for a third term. He stated that the move by Nkurunziza risked bringing “instability and strife” to the area.

Attention was also directed to Ethiopia and, although Obama gave them praise for some of the things that they did as a country, he also had some strong words for them as well. To quote the president “It will not fully unleash the potential of its people if journalists are restricted or legitimate opposition groups can’t participate in the process.”

There were also some strong words in opposition to practices that are common in some areas of Africa. Child marriage and female genital mutilation were two of those “bad traditions” that were singled out. When he discussed those points, whistles of approval came from the audience.

Obama discussed the need to respect the freedom of others and as a result, he said that the nations in Africa could become more free. He also admitted to the imperfection of America then said that political opposition could be “a source of strength” to those African nations.

President Obama ended his speech by discussing apartheid and what Africa has achieved in overcoming that issue. To quote the president yet again, “That is why I stand before you as the first African-American president of the United States.”