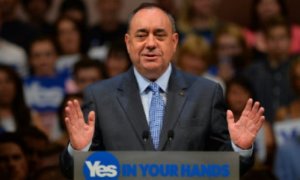 Scottish first minister Alex Salmond announced his resignation on Friday, a day after the referendum for Scotland’s independence. Scotland will remain a part of the United Kingdom, along with England, Wales, and Northern Ireland, a union in place for 307 years.

Shortly after the official result was announced, the Scottish leader conceded defeat as Better Together campaign leader Alistair Darling celebrated victory with his supporters in Glasgow. A month prior to the referendum, Salmond and Darling had two televised debates. A local survey revealed that Salmond won the second debate by far.

“The last seven years as first minister of Scotland has been the privilege of my life but I think that’s a reasonable spell of service, and I think that we have to understand and recognise when it is time to give someone else a chance to move that forward,” Salmond said in a statement, as he announced his resignation.

“For me right now there is a decision as to who is best placed to lead this process forward politically. I believe that in this new exciting situation, redolent with possibility, party, parliament and country would benefit from new leadership,” the 59-year old Scottish leader said in his speech in Edinburgh.

Salmond added that Scotland can still carry the political initiative despite the loss and that the nation’s dream for independence will never die. He said he has told the SNP National Secretary that he will not accept the nomination to be a candidate for leader at the Annual Conference in Perth, which is set from November 13 to 15. Salmond did not mention however, who will be replacing him.

Meanwhile, British Prime Minister David Cameron said, “It would have broken my heart to see our United Kingdom come to an end… I am delighted. Now is the time for our United Kingdom to come together and move forward.” He added that the vote “represents an opportunity to change the way the British people are governed.”