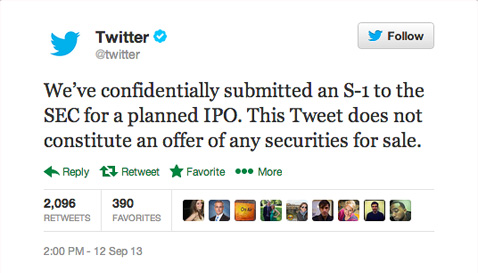 Social network Twitter announced Thursday that it plans to go public in a message posted on its official @twitter account. “We’ve confidentially submitted an S-1 to the SEC for a planned IPO,” said the company its tweet, adding: “This Tweet does not constitute an offer of any securities for sale.”

The social network started in recent months the groundwork for the listing. On Tuesday it announced the acquisition of a mobile advertising company, MoPub , given that this sector has become vital in the competition on the Internet.

Twitter ‘s challenge will be to succeed in launching an IPO after Facebook has faced serious problems, marked by technological issues which disrupted its listing and caused many complaints. The value of Facebook shares fell in the first day of trading in May 2012 and it took over a year for the stock to recover.

Jack Dorsey, a web developer and businessman that created Twitter, had the idea to launch a messaging service of up to 140 characters, originally designed for mobile phones, while working with a podcast company, Odeo, along with two other co-founders of Twitter, Biz Stone and Evan Williams.

Twitter was launched in March 2006 and since then has continued to grow. Twitter was valued last month at approximately $10.5 billion by GSV Capital Corp., up 5 percent from a previous May estimate.

Twitter listing on the stock exchange was one of the favorite topics of speculation in Silicon Valley and on Wall Street in recent years, and company executives have always bypassed the subject, avoiding disclosing the company strategy.

Twitter is the last of the major social networks that has not yet listed on the stock exchange. Facebook and LinkedIn spin the billions already on the Wall Street, with a market capitalization of $108 billion and $32 billion, respectively.

U.S. law requires companies to go public if they attract more than 2,000 private shareholders. Also, companies with revenues less than $1 billion per year are not required to make public the documents for the listing, hence the secret procedure announced by Twitter.

Same as Facebook, Twitter needs to show investors that the business can generate sustainable growth in the long term as a large number of users are accessing the service from mobile devices, primarily smartphones. Twitter boasts 200 million active users, who send 400 million short messages, or “tweets” every day. Almost 60 percent of these messages are coming from mobile devices.

Typically, companies sell less than 20 percent of their shares during the IPO. Many observers predicted an initial public offering from Twitter for last year, after the company made a series of acquisitions to strengthen its control over the distribution of messages posted by users.

After listing, Twitter will need to develop ways to monetize the network. Some analysts believe it will follow Facebook’s path that advertises through posts of “friends” and launched advertising products developed for mobile devices. Other experts, however warn that such a strategy could alienate users.