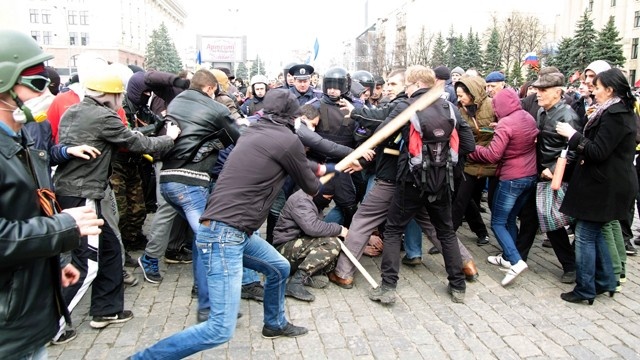 In a televised message earlier, Turchynov declared, “Enemies of Ukraine are trying to play out the Crimean scenario, but we will not let this happen.”

Pro-Russian activists seized government buildings, hoisted Russian flags, and declared a separatist republic in the cities of Donetsk, Luhansk, and Kharkov over the weekend. Police dispersed the demonstrators with cannon and pepper spray, but no casualty was reported in the operation, according to Victoria Sumar, deputy secretary of the National Defence and Security Council.

In the mining city of Donetsk, activists seized a regional administrative building, announced a self-proclaimed legislature called the Donetsk People’s Republic, and called for a May 11 referendum to determine whether or not the region should be annexed to Russia. The protesters also took over the regional administrative building in Kharkov, and the offices of the security services in Luhansk.

Donetsk is the home base of overthrown Ukrainian President, Viktor Yanukovych, whose government was pro-Russia. He was removed from office in a popular protest in February. The Russian government, which considered his ouster a coup, reportedly responded by dispatching about 40,000 troops close to the Ukrainian border. It warned the Ukraine government to stop blaming Russia for the country’s problems.

Meanwhile, White House spokesman, Jay Carney, called on Putin’s government to repudiate the protests, warning that further Russian military intervention would result in more stringent economic sanctions than those which have been imposed over the Crimean takeover.

Last week, President Putin told German Chancellor Angela Merkel that he had ordered the withdrawal of some Russian forces from the country’s border with Ukraine. But NATO later belied his statement as it did not see any sign that Russia was pulling its military from the border.